Boring is a machining process in which a drilled hole is enlarged using a single-point cutting tool in an internal turning operation. Boring can be used for roughing or finishing an internal surface. Tolerances are generally held within ±0.002″ to ±0.0005″. 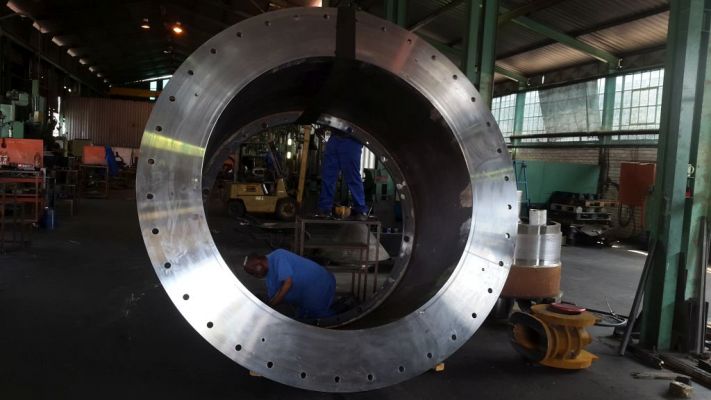 Boring is a machining process in which a drilled hole is enlarged using a single-point cutting tool in an internal turning operation. Boring can be used for roughing or finishing an internal surface. Tolerances are generally held within ±0.002″ to ±0.0005″.

There are two main advantages to using a boring mill rather than another machine tool. In general, they have a larger configurable envelope for a part; very large parts can easily be machined on a boring mill. “Boring mills are synonymous with large envelope work,” Conners said. “So any workpiece that has to be machined and has dimensions beyond about a 60″ envelope is typically routed toward a boring mill, because the traditional horizontal machining centers aren’t built for larger envelopes.”

Another advantage is that a boring machine features a spindle that advances out from its headstock, allowing the end user to reach into small cavities. “With a live spindle you have the opportunity to keep the tooling short from the cutter point to where it fixes to the spindle and you minimize tool deflection,” said Kenneth Campshure, director of sales for boring machine manufacturer MAG Giddings & Lewis, Fond du Lac, Wis.

“On a horizontal you have more versatility, because it doesn’t limit your part size,” Morgan said. “You might only be working on three feet by three feet of it but you could put a 10’ tall part on the table, whereas with a vertical machine you could only put maybe a three foot part on the table.”

Despite these differences, vertical and horizontal mills generally see equal amounts of use. John Ilczyszyn, owner of job shop Pride Machine Tool Inc., Melrose Park, Ill., has both types in his shop and finds it difficult to say which is more popular. “All of our machines are busy and we have just as much work on the vertical boring mill as we have on the horizontal boring mill,” he said.